Skateboarding in New York: Between Public Space and Private Realm (Part I) 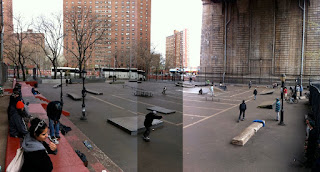 “Surely it is the supreme illusion to defer to architects, urbanists or planners as being experts or ultimate authorities in matters relating to space.” (Henri Lefebvre, as quoted by Iain Borden)

My relationship with skateboarding began in graduate school. In my second year in Columbia’s urban planning program (2009), we were tasked with writing a thesis on a contemporary topic. To me it was really important to write about the real world, something people would relate to and could demonstrate how urban planning mechanisms shape everyday urban life. One day laying on my bed in my old apartment on 2nd Street, the window was open and I heard the wheels of a skateboard roll across the pavement (a common sound). Something clicked in my mind and I started my research. I was tentative at first - I didn’t skate and I am a woman - but my intellectual curiosity was piqued and I was soon excited by what I found.

I quickly learned that there is a complexity to skateboarding. As Iain Borden notes in his book “Skateboarding, Space, and the City” (1998), skateboarding, although not a crime, can be seen to threaten the status quo in cities but in different ways than activities like graffiti or homelessness. It “is neither explicit protest nor quiet conformism, game nor sport, public nor private, adult nor childish, and above all, precisely because it is a spatially and temporally diffused and dispersed activity.” The geography of skateboarding in New York is vast. Skateboarders’ use of public space is often contested and can involve an appropriation or takeover of spaces, while transcending how architects, urban designers, planners, and governments typically conceptualize public spaces to be used.

My thesis “The City is a Skatepark: How Can Planning Best Address Skateboarding in New York City?” ultimately focused on an analysis of negative and positive planning, for example, skate stopping stair rails and benches (negative- to prevent) and the building of skateparks (positive- to promote). I explored how New York City might be able to plan for skateboarders in more diverse ways, such as designing parks with shared spaces that are integrated into the fabric of the City, without being segregated by fences. Mainly, I argued that there is no better expert than the user and that the City’s attempts to build skateparks with prefabricated equipment and designed by in-house landscape architects, inexperienced with the nuances of how skateboarders use space, could not be expected to be successful. It was best to engage youth, to use the techniques of participatory planning that were reinforced to me constantly since the first day of planning school. Little did I know that only a few years later, I would be tasked with putting this into practice by managing the rebuilding of a skatepark- the LES skatepark. (Part II- the (new) LES Skatepark- a public/private partnership, coming tomorrow).