Culture, Memory, and the East Village 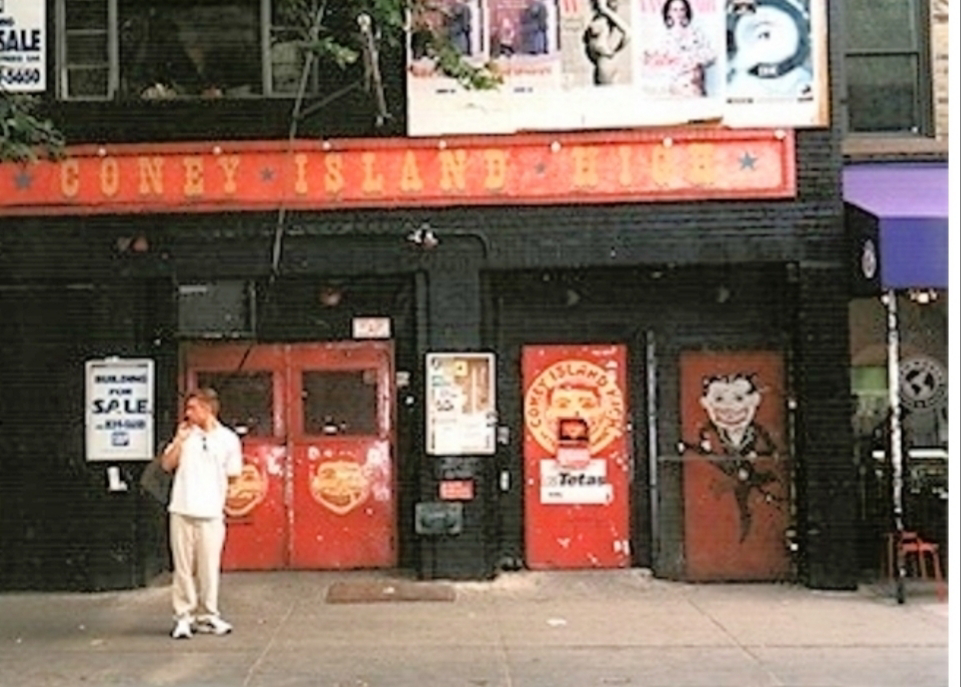 As a suburban teenager in New Jersey my first connection to New York City was culture- more specifically music. As I now walk the same East Village blocks I did back then, although the landscape has changed, the built environment still holds history, holds memory. I don’t know why I first took the train and headed to St. Marks Place or how I knew to go there. I did know that I could buy cds from Sounds for $9.99- which was helpful given my parents reluctance to help me purchase music (an unnecessary extravagance in their eyes) and my own limited money. But that was my obsession as a teenager- music. I wanted my own copies of Blondie and all the other bands that had come from this neighborhood. I would buy my cds and then sit on the stoop of the store and watch people go down the block.

Diagonally across the street was Coney Island High, a popular punk rock club that inhabited 15 St. Marks Place for four years and closed in 1999. I wasn’t old enough to go to clubs, but I remember sitting on the stoop one day seeing police and the venue’s crowd emptied onto the street. During this era, “quality of life” was a primary concern of the Giuliani Administration. The City’s Social Club Task Force, including representatives from the Police and Fire Departments, the State Liquor Authority and other state and city agencies, conducted surprise inspections, including at Coney Island High.  At the time the Mayor’s Office stated, ''The task force targets social clubs in response to complaints from club customers and neighborhood residents as well as from intelligence developed from the New York City Police Department. Public safety is the paramount concern in these enforcement efforts.'' At the heart of this was a battle over what was considered a valuable element of urban life. The president of the New York Nightlife Association said that he did not think that the task force had timed recent Saturday night inspections to disrupt business but that while ''the nightlife industry is a $3 billion industry, it is unfortunately not seen as a component of the social and economic fabric of New York.'' (NY Times- NEIGHBORHOOD REPORT: VILLAGES EAST AND WEST; The Cafe Police Pop In for a Raid, July 5, 1998). The City also aggressively enforced a requirement from the Prohibition era that any nightlife establishment that might have dancing require a cabaret license (the regulation was eventually repealed in 2017). Coney Island High had trouble obtaining the license because it was situated in a residential neighborhood and the club closed as its business was affected.

As an adult who now works as an urban planner I am well versed in the complexities of culture and economic growth and how governance and culture interact in NYC.  But as a teenager all I knew was that I wanted to be where my favorite bands came from. This was in the 90’s before Richard Florida’s The Rise of the Creative Class (2002) encouraged cities to use culture to spur economic development (not foreshadowing or acknowledging the potential displacement to come). This was before Elizabeth Currid’s somewhat obvious characterization of the importance of the cultural or “Warhol Economy” (2007). This was before I had ever heard the word gentrification. Again, at the time I was not thinking of these dynamics that I have since spent my career focusing on. I was just sad that the culture I was attracted to was disappearing. 15 St. Marks Place was eventually knocked down and a condo building was erected in its place. Sounds also recently closed but the building and its front steps are still there. Yesterday I walked past and stopped to look at the steps and could still remember what it was like to sit there twenty years ago. And now an even bigger new building rises right down the block.