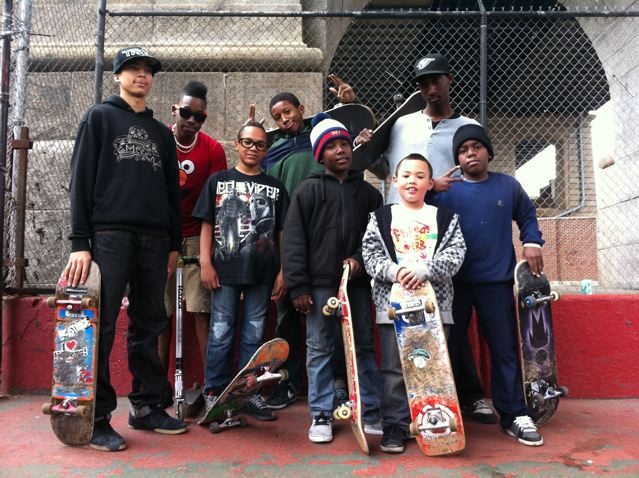 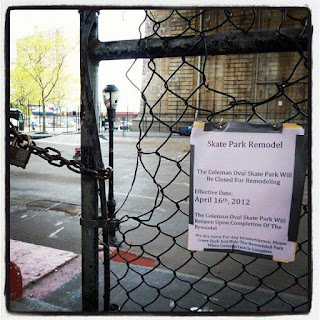 There are many interesting aspects to the story of the rebuilding of the LES Skatepark, but years later two elements stand out. One is how the project was structured and two was the role of the urban planner to fulfill the specific needs of the user (skater).

While in the final throes of my masters thesis at Columbia - having written 50+ pages about skateboarding and skate stopping and skateparks and the role the City played in it all (Blocking? Planning? Facilitating? Supporting? Just getting out of the way?) - I contemplated what to do next, what was I going to do with all of this? I had a feeling there would be something but that it wouldn’t be a typical urban planning job, because all I knew for sure was that I was graduating in the middle of a recession (2009).

I had built relationships in skateboarding through my social life, my research, and a few other related projects. In 2011 Architecture for Humanity (AfH) and Nike awarded a grant to redesign and rebuild the LES Skatepark through GAMECHANGERS, a revolving grants program to fund the design and construction of “innovative, sustainable, and safe places to play.” The intention was to develop these spaces in communities that were disenfranchised or typically overlooked for this type of funding. The LES Skatepark (located in Chinatown/Lower East Side) was plagued with issues including prefabricated equipment that was difficult to maintain and an asphalt surface that left black dust all over those than landed upon it.

Hired as the project’s Design Fellow to manage things on the ground, it was thrilling to be able to use my skills and knowledge to build a park- something tangible that would be part of the built environment of the City. The project was structured through an Adopt a Park agreement. This meant that a public park (managed by the NYC Dept of Parks & Rec) would be constructed with funds from a private entity (Nike/AfH). This was an interesting hybrid of public and private. A “public space” is meant to be a place where anyone can go. However these spaces are also designed and managed to control the behavior of the user. Where you can sit, where you can play, where you can people watch- all of these choices are influenced and controlled by the design and configuration of spaces like the placement of benches and gravel and turf and grass. Skateboarders in New York disrupted this by utilizing public spaces designed for other passive uses. The redesign of the LES Skatepark aimed to balance the priorities of both the user, by safely recreating parts of the urban fabric that skaters enjoyed through custom concrete elements, but also the City, by placing those elements within the confines of a controlled space.

But there exists an additional layer over this- that while the park could be not branded with any corporate signage (no swooshes) - it could be branded through activating the park with free skate events and contests. These marketing opportunities allowed for Nike to have some unofficIal cultural ownership of the park and to connect directly with their consumers, a large portion of which in the Lower East Side are black and latino youth. Not that I think it’s a bad model- as someone who would later be in a position of trying to use public money to build cultural space- the ability to cut through red tape and bureaucracy that private funds allow is great, as time is often a killer of public projects.

My role was to keep all the moving pieces together, including the complicated public approvals process. Navigating a civil society and its bureaucracy is delicate and complex- there are various stakeholders and constituencies with competing desires and priorities and values. Elderly citizens were concerned that the park would attract more traffic to the area, including the danger of skateboarders racing down the sidewalks. The City’s Public Design Commission wanted to know if the park’s apple skate obstacle was actually a sculpture that needed their approval. The Dept of Transportation wanted to know if digging up tens of thousands of square feet of asphalt would disrupt the bridge the skatepark was under. Why did we want no fences (a non starter) - what if homeless people started taking refuge there at night?  Why did we want to move a dog run (that was essentially asphalt with a chain link fence around it)? Why did it need to happen so fast?

Even within my own team there were questions about why I wanted to host planning and design sessions with local youth when we had seasoned skatepark designers and builders on board. This was before I knew about concepts like equity-based social impact design. What I did know was that young people were often left out of the urban planning process, that they had expertise as users, that their participation could hopefully invoke a sense of ownership and responsibility, that teaching them about what it took to build the park was something we could also leave behind. It was a challenging experience but ultimately the park was built after a year and half of planning and design. Looking back, the experience cemented one of my most important values as a planner- the community knows its own needs best.